The Artificial Islands of Dubai

While Dubai has many beaches and hotels, the country begun to face a serious challenge as it quickly started to run out of sufficient coastline that would attract the number of tourists they were targeting. It is then that the Sheikh looked out into the sea and decided to reshape the entire geography of Dubai’s coastline by adding more of it.

One of the world’s most audacious and controversial engineering projects ever, Dubai’s artificial islands comprises of a collection of reclaimed islands constructed by Nakheel Properties. As though the task of creating an artificial island was not daunting enough, the Sheikh wanted an island that would be sustainable enough to hold a city full of shopping malls, restaurants, hotels, luxury villas and splendid beaches – as well as one that could be seen from space.
Undoubtedly a bold, ambitious plan to sustain the economy of Dubai and make it the world’s most popular destination, the continuous environmental concerns and financial constraints leave many wondering if Dubai has bitten off more than it can chew. 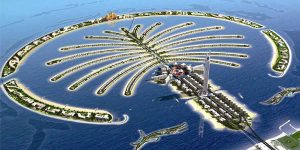 The smallest island of the three palm islands, Palm Jumeirah consists of a 2 kilometers trunk and 17 palm leaves where luxury villas and private beaches have been constructed. It is all protected by an 11 kilometers semi-circular breakwater, which prevents erosion of the sand by the powerful currents and the strong Shamal wind in the Persian Gulf.

Construction began on the Palm Jumeirah Island in June 2001. It involved two phases: construction of the land foundations and building of infrastructure and services to make the island habitable. Created using 94 million cubic meters of sand and 7 million tons of rock, with each rock placed individually by a crane, signed off by a diver and given a GPS coordinate. Dredgers collected sand from the sea and dumped it where the breakwater was to be constructed. All this had to be one when the sea was calmest. To ensure the stand stayed in place, rubble was dropped on to it, raising the breakwater to a height of 4 meters above sea level. Two layers of large rocks weighing up to six tons each cap the structure, creating a formidable sea defense. Builders had to excavate these massive rocks from 16 quarries across U.A.E. The natural rock was used to encourage the creation of a natural reef and provide habitats for sea life. To eliminate the chances of water stagnation, the breakwater also has two 328-foot openings on each side. Using 8000 ton dredgers, sand was collected from the sea floor and dumped on the required area using a process known as “rainbowing”. To ensure the island was constructed at the right location and took on its precise shape, construction was guided by GPS (Global Positioning System). A private satellite would give out coordinates and the dredgers would fill the area of the sea as directed by the satellite. Furthermore, to protect the island from sinking in the event of a disaster such as an earthquake, the sand was compacted using a technology called vibro compaction which increased the density of the loose sand by saturating it with jets of water and vibrating it with probes. After 6 months, the manmade island was safe enough for accommodation. Buses would transport about 40,000 workers to the site who begun to work on installing gas pipes, water pipes, electric and telephone cables as well as build roads. These construction workers lived on the fronds and in anchored cruise ships while building the island.

Seven barges and the remains of two fighter planes have been dropped on the seafloor to attract marine life and create an underwater theme park. In 2009, the first railway system in UAE and also the first monorail system in Middle East, the Palm Jumeirah Transit System, started its operations. Additionally, a six-lane sub-sea tunnel connects the island to the mainland. Workers had to use a dam to drain the area and excavate the seabed before re-releasing the water.
The whole project was completed by 2006. 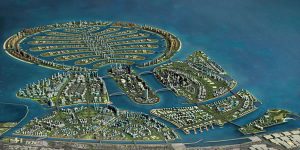 The Palm Jebel Ali Island is designed to be 50 percent larger than the Palm Jumeirah. It will include six marinas, a water theme park, ‘Sea Village’, homes built on stilts above the water, and boardwalks that circle the fronds of the “palm” and spell out an Arabic poem by the Sheikh. While construction work began in 2002, the financial crisis in 2008 led to work on this island being suspended. When it is completed, the island will serve as a tranquilizing spot, suitable for family recreational activities.

Designed to be the largest of all the Dubai Palm Islands, the Palm Deira was originally designed to have a trunk with a crown of 41 fronds and will be 5 times larger than Palm Jebel Ali. However, due to changes in the depth of the Persian Gulf the farther out the island goes, the design was reconfigured to have only 18 fronds. It is rumored that construction for this island will consume over a billion cubic meters of rock and sand but like Palm Jebel Ali, work on this island has been suspended. 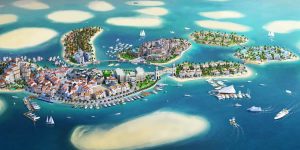 A collection of 300 man-made islands shaped into the continents of the world, The World is set to offer the ultimate hideaway for privacy and exclusivity in the form of private homes, estate homes, dream resorts, and community islands. Located 4 kilometers off the shore of Jumeirah, close to the Palm Jumeirah, each island ranges from 23,226 to 83,613 square meters in size with 50 to 100 meters of water between each island. It is surrounded by an oval shaped breakwater. The only means of transportation between the islands is by marine or air transport. Already, two-thirds of its 255 man-made islands have been sold. However, work progression on the island has been suspended and owners are unable to make any developments on their islands due to lack of infrastructure. 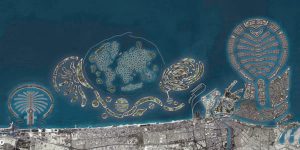 Taking on yet another massive project, Nakheel also announced plans to develop The Universe, a series of man-made islands in the form of the sun, stars and planets of the solar system that will add more than 7,500 acres worth of man-made islands. Expected to take about 15 years to build, the project has been put on hold. There are many speculations as to whether it will ever take off as residents from The World have raised their concerns about their ability to access their private islands from the coast as well as environmental issues such as the erosion of the coral. The change in the waterways may also erode the beaches.