Ten of the most unique buildings in the world

From the Egyptian pyramids to the Taj Mahal, history has been defined by engineering marvels that have held the world spellbound by its ingenuity and out-of-the-box approach. While these structures continue to feature as an important reference in the modern world, engineers worldwide are now steering the helm with dynamic designs that provoke the imagination and challenge the very existence of mind-bending inventions. From a rotating skyscraper to a dancing house, these engineering landmarks continue to draw wide attention from the world: 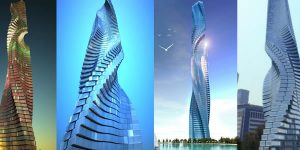 Anticipated to be a landmark of a sustainable and eco-friendly building, the Dynamic Tower will tower 80 floors and rotate at 360 degrees, all at different speeds. Each floor will rotate independently, constantly transforming the shape of the structure. It will also be pre-fabricated, meaning that 90% of the tower will be manufactured at a factory before it is shipped and assembled at the construction site. This strategy will cut down labour costs and construction time to 22 months. Furthermore, the entire building will be powered solely by wind and solar power generators. The wind turbines will be located between two consecutive floors, while the solar panels will be placed on top of each floor and the roof. Initially the building was to be completed by 2010 though as of this year, construction work is yet to begin. 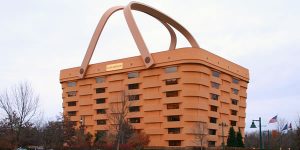 The Longaberger Home Office is the brainchild of its founder, Dave Longaberger and replicates the company’s Medium Market Basket. Two basket handles are attached to the top of the building with copper and wooden rivets replicating those on a Longaberger Basket. The handles are heated to prevent ice from forming. Most of the cherry woodwork used in the building was harvested from Longaberger Golf Club and processed in the firm’s mill. The seven storey building is situated on a property of 25 acres and was completed in December 1997. It attracts thousands of visitors each year. 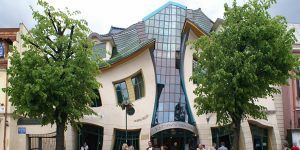 Built in 2004, the Krzywy Domek is a unique shopping centre in Poland that is also known as the Crooked House in English. Designed by Polish architects Szotyscy & Zaleski, the inspiration for the building was drawn from fairy-tale illustrations and drawings of Jan Marcin Szancer and Per Dahlberg. The buildings crazy lines lend a cartoonish feel to the structure, making it one of the world’s most iconic buildings. The building’s unique appearance is accentuated by colourful stained glass entrances, stone elevation decors and windows framed with sandstone. The roof of blue-green enamelled shingles gives an impression of a dragon. Visitors who participate in local cultural events put their signatures on the wall of Krzywy Domek, now named “The Wall of Fame” much like the American Hollywood Walk of Fame. 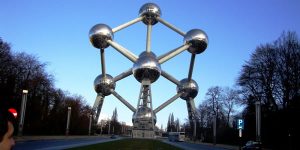 Though it was erected in 1958, the Atomium has held on to its futuristic look, providing an unusual outlook of a utopia, object and place all at once. Originally planned to be a temporary structure that would be dismantled once the World fair exhibition ended, the Atomium continues to be an iconic landmark. It represents an iron crystal magnified 165 billion times. Modelled around a largely magnified iron atom, it features nine spheres interconnected by 20 tubes. While three spheres contain exhibitions from around the world, the top sphere has a restaurant and provides panoramic views of the city. 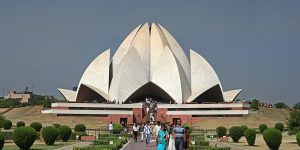 All around the world, the lotus signifies peace and prosperity. Using this as a foundation to build a temple for the Baha’I Houses of Worship, the building is a sanctum of 27 blooming petals made of pristine marble blocks and surrounded by nine pools of crystal clear water. The architect, Fariborz Sahba, used the lotus flower as a metaphor for man’s potential: the flower springs up from muddy water, blooming into something of undeniable beauty. With a capacity to accommodate more than 2000 people, the building has received numerous accolades for structural design and the rationale behind its construction. It is the most visited religious temple in the world. 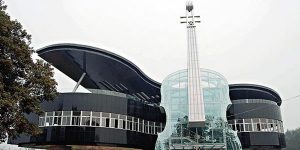 With locals dubbing it “the most romantic building in China” the Piano and Violin shaped building was built in 2007 to serve as a showroom to exhibit the plans of the newly created district of Shannan in Huainan City, China. Made completely out of glass, the violin serves as the entry point, housing the escalators and staircase to the main piano building. The piano house stands on three concrete legs and has a roof terrace beneath a canopy, shaped like a piano’s open top. Displays of various plans and development prospects for the area can be found here. It draws in many tourists as well as newly-weds who use it as a backdrop for their wedding photos. 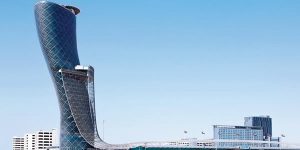 For many years the Leaning Tower of Pisa has held millions spellbound until a rivalling building was erected in Abu Dhabi. The Guinness Book of World Records certified Capital Gate as the “World’s furthest leaning man-made tower” in 2010. The Capital Gate was specifically designed to lean at an angle of 18 degrees by using staggered floor plates from the 12th floor up. The central core of the building slants in the opposite direction to the lean of the edifice, straightening as it grows. The steel exoskeleton sits on an extensive distribution of 490 piles drilled 100 feet underground to accommodate the gravitational, wind and seismic pressures caused by the lean of the building. 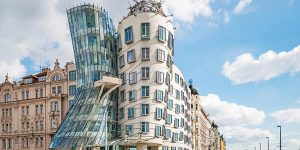 In 1945, a 19th century townhouse was destroyed during a bombing in Prague. In 1994 construction begun for the Dancing house, designed by Croatian-Czech architect Vlado Milunic in co-operation with Canadian architect Frank Gehry. Originally named Fred and Ginger (after Fred Astaire and Ginger Rogers), the house resembles a pair of dancers and as a result stirred some controversy during its construction. Initially intended to be a cultural centre, the building holds mostly offices though there is a French restaurant at the roof which has fine views of the city. Situated next to a busy road, the building relies on forced air circulation which is often a problem for its occupants. 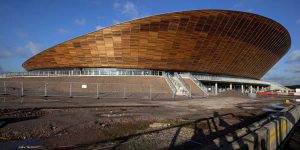 Balancing clean lines with sustainable building strategies, the Velodrome was built by Hopkins Architects for the 2012 London Olympic Games. The distinct saddle-like building was carefully engineered to be simple to construct with lightweight materials. Natural cooling, water harvesting and daylighting has seamlessly been integrated into the structure, boding well for both green design and energy savings. The cedar-clad skin is perforated to allow cooling of the interior. The roof collects rain water which is stored for later use in the faculty. The striking white roof has rows of skylights crossing the complex, providing daylight and allowing overhead lights to be off during the daytime. After the games, the Velodrome is expected to reopen in early 2014 as Lee Valley VeloPark. 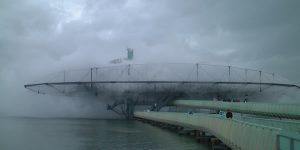 Defined as architecture of atmosphere, the Blur Building was constructed in 2002 for a Swiss Expo. Much like walking into a cloud, the structure’s primary construction material is water, pumped from the lake and emitted into the air by over 30,000 high pressure nozzles. The low hum of the nozzles emitting water vapour into the air blocks out all sound from the outside leaving visitors with a feeling that they have entered a surreal universe. Visitors can enter the cloudy island from a 400 foot long bridge.