The longest ocean-crossing bridge in the world, the Hangzhou Bay Bridge is an S-shaped stayed-cable bridge with six lanes in both directions that shortens the distance between Shanghai and Ningbo by 120 kilometers. The 36 kilometer long bridge required a great number of new techniques, new materials, new equipment and new theories due to the large scale and design of the project. It took close to 600 experts and a total of nine years to design the bridge. The Hangzhou Bay Bridge is expected to boost the economic development of the Yangtze River Delta, also called the Golden Industrial Triangle. Work on the bridge began in June 2003 and was completed in June 2007. The bridge was opened to the public in May 2008 and carried about 50,000 vehicles per day in its first year of operation. The total project cost was approximately $1.5 billion.

Hangzhou Bay is located in an area that has complicated geological conditions, is prone to typhoons and the Qiantang River Tide creates fast water and large waves. The tides frequently change direction making it difficult for construction vessels to maintain a position. Operations are only possible for half of the year and the seawater and strong currents have a corrosive effect on the steel infrastructure. Additionally, beneath the seabed lies large pockets of natural gas which would make any construction work in the area hazardous. Construction feasibility was a major concern and over 120 technical studies were carried out before any actual work started.

Engineers finally agreed on a cable-stayed bridge design because it could withstand the adverse conditions, multi-directional currents, high waves, and geologic conditions at the site. To ensure the bridge looks exquisite and grand, designers ensured that the aesthetics were prominent in every aspect from the shaping and color of each component, transitions between structures, choice of bridge deck systems, and structural lighting. From a bird’s eye view, the bridge is meant to look like a dragon nestled in the Hangzhou Bay. 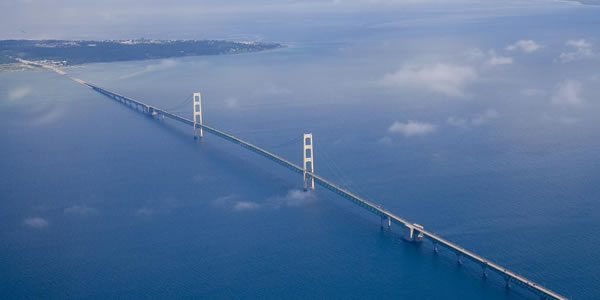 To ward off the difficulty of onshore construction, engineers built some parts on land such as bridge foundations, piers and box girders. The steel piles were 71 – 88 meters in height and 1.5 – 1.6 meters in diameter. Numerous studies and tests were conducted by scientists before they finally settled on a spiral welding method as a suitable construction method for the steel piles. When they were completed, they were transported to the desired location and fitted in. Giant floating cranes with accurate anchoring devices and launching gantries were used to ship and erect these prefabricated components. Severe marine conditions also made it difficult for engineers to anchor barges and construction vessels. The floating cranes made it possible to transport the girder from the shore to the site and then anchor it stably to erect and install the precast concrete box girder.

In order to resist the corrosive effects of the seawater, engineers mixed a large quantity of coal ash and slag to the concrete to produce a special high-density variety. Silicone water repellents were also applied over the concrete and steel to protect the structure from salt water corrosion. The silicone water repellents are able to penetrate the pores of concrete and make the surface more resistant to water penetration. Engineers decided to tackle the natural gas issue by carrying out an exploration to investigate the distribution of the gas and the property of the soil during and after releasing the gas. The gas was then released before pile driving to avoid any disturbance to the soil, collapsing of ground or eruption and flaming of gas.
The entire structure of the Hangzhou Bay Bridge comprises of nine sections:

A Global Positioning System (GPS) was used to monitor the progress of the construction which required precise positioning and accurate placing of piles and pre-fabricated sections of the bridge.

The middle of the bridge has a service island targeted towards drivers who can enjoy a full range of services, including hotels, restaurants, petrol stations and a viewing tower. It also acts as a tourist site for the Qiantang River Tide. During the construction, this offshore platform acted as a living and working base for the offshore constructors. It also served as a relay station for offshore survey and communication as well as an offshore location for emergency rescue and maritime administration.

The Hangzhou Bay Bridge was built to serve for 100 years and can stand up to earthquakes that measure seven on the Richter scale. The bridge has a height of 62 meters, which allows fourth and fifth generation container ships to pass through in all conditions. The Hangzhou Bay Bridge is a stellar example of the possibilities allowed by new innovations and technology in the world today.