The European Organization for Nuclear Research (CERN) is the world’s largest laboratory and is dedicated to the pursuit of fundamental science (the World Wide Web was created at CERN in 1989 by British scientist Tim Berners-Lee). It was founded in 1954 and is situated 330 feet below the Franco-Swiss border near Geneva. Engineers and physicists working in the laboratory use the world’s largest and most complex scientific instruments to study the basic constituents of matter. Purpose-built particle accelerators and detectors have been created to the particles collide together at close to the speed of light, giving physicists valuable insight on how the particles interact and the fundamental laws of nature. One of the projects being conducted at the facility is the Large Hadron Collider (LHC) which is the most powerful particle accelerator ever built. LHC stands for: Large due to its size(approximately 27 kilometers in circumference), Hadron because it accelerates protons or ions, which are hadrons, and Collider because these particles form two beams travelling in opposite directions, which collide at four points where the two rings of the machine intersect. The most ambitious and powerful particle accelerator built to date, the LHC allows scientists to reproduce the conditions that existed within a billionth of a second after the Big Bang. It accelerates hair-thin beams of particles to a whisker below the speed of light and could unearth the origins of mass, shed light on dark matter, expose hidden symmetries of the universe, and possibly find extra dimensions of space.

The concept of building the LHC came alive in the 1980s, when the Large Electron-Positron (LEP) was being designed and built. Groups at CERN spent many years researching the technical aspects and physics requirements of such a machine and finally in December 1994, CERN’s governing body voted to approve the construction of the LHC. Initially, the project was planned in two stages due to budgetary constraints. However, after contributions from Japan, the USA, India and other non-Member States, the project was allowed to proceed in a single phase. Between 1996 and 1998, four experiments—ALICE, ATLAS, CMS and LHCb—received official approval and construction work commenced on these four sites.

The LHC uses the tunnel that was originally built for the LEP, which was dismantled in 2000. The decision was made based on the fact that it was cheaper to excavate a tunnel rather than acquire the land to build at the surface and the impact on the landscape is reduced to a minimum. The shield provided by the earth also provided good shielding for radiation. It runs 27 kilometers in a circular tunnel and weighs more than 38,000 tons. The LHC also comprises of the detectors, which sit in 4 huge chambers at points around the LHC tunnel and the GRID, which is a global network of computers and software essential to processing the data recorded by LHC’s detectors. Superconducting magnets that guide the accelerator ring are made from coils of special electric cable that operates in a superconducting state, efficiently conducting electricity without resistance or loss of energy. This is achieved by chilling the magnets to -271.3°C (a temperature colder than outer space). The accelerator is connected to a distribution system of liquid helium, which cools the magnets, as well as to other supply services. The LHC also has three vacuum systems: insulation vacuum for cryomagnets, insulation vacuum for the helium distribution line and a beam vacuum. The CERN Control Centre houses the controls for the accelerator, its services and technical infrastructure. From the control center, the beams inside the LHC are made to collide at four locations around the accelerator ring. 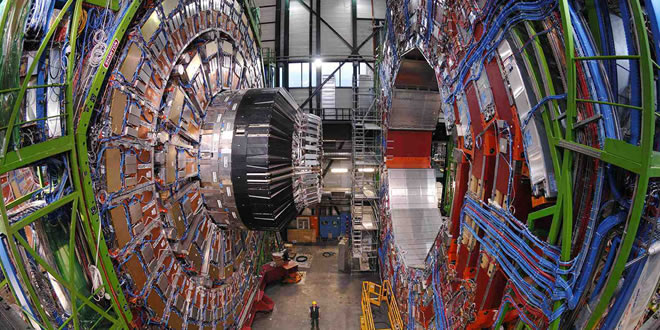 The colliders accelerate particles to high speeds in beams about 2 millimeters wide and then it directs the beams to collide head-on at the collision points at the heart of the detectors. Prior to collision, a magnet is used to bring the particles closer together to increase the chances of collisions. The particles in the collider are protons or lead nuclei which both have positive charges and can be steered by the use of appropriate magnetic fields. Each beam consists of nearly 3000 bunches of particles and each bunch carries as many as 100 billion particles. When the bunches cross, a maximum of about 20 collisions occurs between 200 billion particles. Detectors are placed around the collision points, allowing scientists to identify these new particles by tracking their behavior. They follow the millions of collisions and new particles produced every second and can identify interesting new particles and their distinctive characteristics. Researchers can then glimpse into the fundamental structure of the Universe and further back in its history from the energy produced in the collisions.

At the moment the LHC has been closed and is receiving a massive upgrade which is expected to boost its particle energy from eight trillion electro-volts to 14 trillion electro-volts. It will be reopened in 2015 and scientists and engineers anticipate that they will be able to discover much more.

CERN is a partnership between 20 European states and many non-European countries. The LHC project has brought together about 670 scientists representing 65 different universities and laboratories from 16 countries with support from about 250 technicians and engineers. It has presented a unique opportunity of training a world class of scientists and engineers. The knowledge, expertise and technology that is spun off from this project can be directly applied to development of new medical, industrial and consumer technologies. While the benefits of this experiment may not be seen for several years, any answers that may be found will provide a new understanding of the physical world and could help future generations.