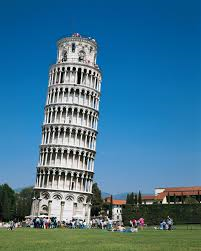 Engineers are often prone to making mistakes. That is why we constantly have to check and double-check everything that we do. It is this type of keen focus on what we do that allowed generations of past engineers to create some of the most remarkable engineering projects.  However, details are sometimes overlooked, numbers misrepresented or even units misread.  While some of these mistakes are miniscule and can be corrected, history has witnessed some colossal oversights that led to huge disasters and in some cases, popular travel destinations.

The Leaning Tower of Pisa

One of the world’s greatest attractions is actually a result of an engineering error. For over 800 years, the leaning tower of Pisa continues to draw worldwide attention and is a popular destination for tourists. Construction began in 1173 on an unstable foundation that comprised of mud, sand and clay. When engineers got to the third floor, the tower began to sink into the soft soil and lean on one side. They tried to fix the problem by making the columns and arches of the third story on the sinking northern side slightly taller. However, construction halted due to political unrest and only resumed a century later. The tower was closed in 1990 for safety reasons and millions of dollars were poured in to stabilize the structure and set it back to the position it had in 1838. Engineers added cables to stabilize the structure, then excavated under the tower and added trusses and counterweights.

Known as the “Galloping Gertie”, the original Tacoma Narrows Bridge was opened in July 1940 and at the time it was the third longest suspension bridge in the world. Its nickname was derived from the bridge’s sensitivity to high winds, causing it to sway and vibrate. Just four months after opening, the structure collapsed though its only fatality was a black Cocker Spaniel. Engineers failed to account for the aerodynamic forces within the location, especially during periods of strong winds. Thus the bridge was vulnerable to vibrations generated by wind. A replacement bridge was constructed ten years later, after the end of the Second World War. The remains of the original bridge remain at the bottom of Puget Sound, where they form one of the largest man-made reefs in the world.

On 26 April 1986, a structurally unsound reactor in the Chernobyl Nuclear Power Plant, located in Ukraine, exploded. It was the worst nuclear power plant disaster in history, resulting in a severe nuclear meltdown. Highly radioactive materials were discharged into the atmosphere and over an extensive geographical region following the explosion. It spread to as far as Italy and to date over 500,000 deaths have been linked to this catastrophe. By May, about 116,000 people that had been living within a 30-kilometre radius had been evacuated and later relocated to safer regions. The accident was caused by a flawed reactor design that was operated with inadequately trained personnel and poor safety regulations.

2,000 dancers gathered in the atrium of the Hyatt Regency Hotel on July 17, 1981 to partake in a dance contest. Visitors gathered on three walkways suspended from the ceiling so that they could observe the festivities in the lobby below. As the night wore on, two of these suspended walkways collapsed, killing 114 people and injuring 216 more. Investigations into the collapse revealed serious design flaws in the structure that were as a result of miscommunication between the engineering firm, Jack D. Gillum and Associates, and the Havens Steel construction company. The engineers who had signed off on the plans lost their licenses and the owner of the hotel paid over $140 million in legal claims to the victims or their families.

In 2005 Hurricane Katrina hit New Orleans, devastating the city and flooding about 80 percent of the region, killing thousands and displacing several families. The U.S. Army Corps of Engineers were found liable for this devastation which was compounded by an antiquated levee and canal system that protected the city. The levees failed because they were built in a disjointed fashion, were inconsistent in quality, materials and design and outdated data was used that left gaps exploited by the storm. Additionally, engineers did not take into account the poor soil quality underneath New Orleans. Since then the U.S. government has spent more than $15 billion to upgrade the system.

One of the worst environmental disasters in U.S. history, the Deepwater Horizon occurred in April 2010 after an explosion tore through a British Petroleum drilling rig. 11 crew members were killed and it is estimated that 180 million gallons of oil was released into the gulf. Over 8,000 animals were reported dead just 6 months after the spill and 16,000 total miles of coastline were affected, including the coasts of Texas, Louisiana, Mississippi, Alabama, and Florida. Mechanical failure as well as human error led to this colossal catastrophe. The engineers repeatedly ignored the well’s orneriness and chose to take quicker, cheaper and ultimately more dangerous actions that eventually led to the total well blowout.

Just a few seconds after the space shuttle challenger was launched in January 1986, it broke apart and killed everyone aboard. It resulted due to the failure of the solid rocket booster O-rings to seal properly, allowing hot combustion gases to leak from the side of the booster and burn through the external fuel tank. Though the problems with the O-rings had been known for nine years, engineers continued to ignore it as they assumed safety was ensured with the presence of the second ring. Eager to launch the shuttle, NASA managers also ignored warnings from engineers that low temperatures could exacerbate the problem.

Built in the early 1950s as party of a huge project to control flooding and produce electricity in central China, the Banqiao Reservoir Dam could hold back almost 500 million cubic meters of water. A hydrologist called Chen Xing warned that overbuilding of dams (over 100 were built in that period) and reservoirs could raise the water table in Henan beyond safe levels and lead to disaster. Furthermore, the dam was only built with 5 sluice gates when Xing warned that it needed at least 12. In August 1975, Typhoon Nina dropped more than a year’s worth of rain in just 24 hours and the dam failed. It released the equivalent of 280,000 Olympic-sized swimming pools, taking with it entire towns and killing as many as 171,000.

Towering over Boston’s North End, construction ended on a massive molasses tank that stood 50 feet tall, 90 feet in diameter, and held more than 2 million gallons of molasses. The tank would help sate the USA’s appetite for industrial alcohol, largely for use in the munitions business. However, in their haste to make a profit, the owners overlooked the wisdom in hiring skilled engineers and instead sought out a man who was unable to read blueprints or even order a simple stress test. As a result, the tank exploded without warning and caused a wave of molasses and debris to travel down the street at 35 miles per hour. At 25 feet high, it ripped buildings off their foundations, killed 21 people and injured 150 others.