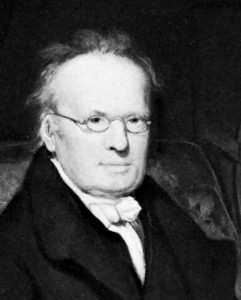 Marc Isambard Brunel is the father to the more popular Isambard.  Marc is a great engineer in his own right having significantly contributed to solving problems associated with  of underwater tunneling. In 1818 he patented the tunneling shield, a device that made it possible to tunnel safely through waterbearing strata.  Marc was a prolific inventor, credited with the designing machines for sawing and bending timber, making boots, knitting stockings, and printing.

Brunel worked on an enormous number of ingenious projects, including a suspension bridge, a series of (ultimately impracticable) compressed air engines, and the first double-acting marine steam engine. Sadly he lacked a commercial intelligence commensurate with his professional skill and in 1821, after various losses, he was sent to  a debtors’ prison. Redeemed by a grant from his friends, he began his last and greatest work, the construction of a tunnel under the Thames, which was completed in 1843.