World’s Tallest Building Opens -How Tall Is Too Tall?

Skidmore, Owings and Merrill, LLP (Chicago) are listed as the architect and engineer of record. Bill Baker, the Chief Structural Engineer for the project, invented the buttressed core structural system in order to enable the tower to achieve such heights economically.  Adrian Smith, who worked with Skidmore, Owings and Merrill (SOM) until 2006, was the Design Partner on the project. Turner Construction Company was selected as the construction project manager. Under UAE law, the Contractor and the Engineer of Record are jointly and severally liable for the performance of Burj Dubai. Therefore, by adoption of SOM’s design and by being appointed as Architect and Engineer of Record, Hyder Consulting is legally the Design Consultant for the tower.

The total budget for the Burj Khalifa project is about US $1.5 billion; and for the entire new “Downtown Dubai”, US $20 billion. The metal-and-glass spire is touted as a “vertical city” of luxury apartments and offices. It boasts four swimming pools, a private library and a hotel designed by Giorgio Armani.

According to the Burj’s developers, they are “confident in the safety of the tower, which is more than twice the height of New York’s Empire State Building’s roof.  Greg Sang, Emaar’s director of projects, said the Burj has ‘refuge floors’ at 25 to 30 story intervals that are more fire resistant and have separate air supplies in case of emergency. And its reinforced concrete structure, he said, makes it stronger than steel-frame skyscrapers.”

Engineer Baker reported that the Burj developer continued to push the design higher even after construction began, eventually putting it about 984 feet taller than its nearest competitor. This push came from Dubai’s determination to “reshape itself into a cosmopolitan urban giant packed with skyscrapers.”

How tall is too tall for a building? How complicated is too complicated for a bridge?  What do you think? 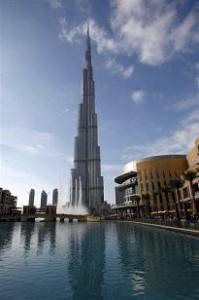 About Carol A. Metzner