The World’s Most Amazing Roads

Mobility is a key aspect of the modern world. Civil engineers are fundamental in providing the rail, road and air infrastructure that supports our economic and social well-being, as well as addressing the environmental challenges that our transport demands create. Transportation by road is the most accessible mode yet most people give very little thought to the dynamics of creating an efficient system that supports a burgeoning population. Some of the world’s most amazing roads mentioned below have the most beautiful natural sights ever seen, are extremely dangerous and are works of engineering perfection. 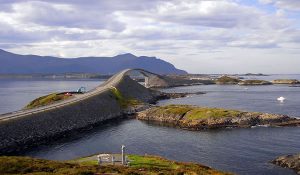 Known as Atlanterhavsveien in Norwegian, the Atlantic Road was opened on July 7, 1989. One of the most scenic routes in the world, the 5.2 mile section of Country Road 64 consists of several causeways, seven bridges, and four viewpoints. Linking the islands between Molde and Kristiansund in the western fjords the road winds over an entire archipelago in the Norwegian Sea. Storseisundet Bridge, the tallest bridge on the road, has a dramatic and beautiful curve. Voted the “Norwegian Construction of the Century” in 2005, a panoramic view featuring whales and seals, curvy bridges and a roller coaster feel makes it a popular destination amongst road trippers and motorcyclists. The engineers who worked on the road were subjected to 12 hurricanes before it was completed. 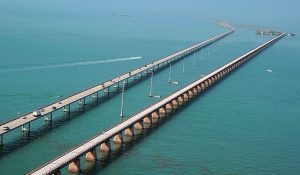 Made up of 100 tiny islands, the Florida Keys is connected by 42 bridges and one long road: the Overseas Highway. Built in 1938, the road follows a trail originally built for a railroad that was destroyed by a hurricane three years earlier. The highway’s foundation included some of the original railway spans as well as the coral bedrock of individual keys and specially constructed columns. In 1982, 37 bridges were replaced with wider, heavier spans, including the well-known Seven Mile Bridge at Marathon. The Florida Keys Overseas Heritage Trail was added in 2002, a paved recreational path that has interpretive trailheads designating attractions, an art bicycle rack and a limestone column sign with an Overseas Heritage Trail map. Sometimes called “The Highway That Goes To The Sea” the road is surrounded by a colourful seascape that is home to a complex habitat of birds from great white herons, roseate spoonbills to ospreys. 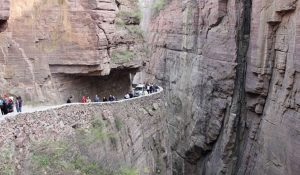 One of the most dangerous roads in the world, Guoliang Tunnel Road is often referred to a she road that does not tolerate any mistakes. In 1972, desperate villagers from the Guoliang village decided to carve a road right into the side of the mountain. Cut off from civilization, access to the village was very limited and they only had a very difficult path carved into the mountainside. It took 13 villagers five years to complete the project, though several died during construction. Opened to traffic for the first time in 1977, the Tunnel Road is about 12 feet wide by 15 feet high. Located in the Taihang Mountains, the road has more than two dozen “windows” which were chiselled out of the sides of the 1200 meter long tunnel during the construction to empty out rubble. Today they offer stunning views from the cliffs into the valley hundreds of feet below. 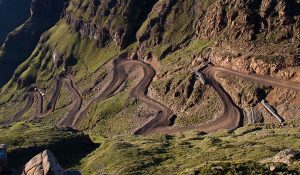 A notoriously dangerous road, the Sani Pass provides access from the Natal Drakensberg Park into magical Lesotho. The gateway to the “Roof of Africa” requires the use of a 4X4 vehicle, particularly in poor weather. The road spots occasional remains of vehicles that did not succeed in navigating its steep gradients and has a history of frightening stories of failed attempts at ascending the path over the Northern Lesotho mountains. A popular mountain biking destination, the pass hosts the annual Sani Pass Transfrontier Mountain Bike Epic in December. Established in 1913 as a bridal path, the road was a well-used mule trail for traders. The very first vehicle rode up the stony Sani Pass in 1948. 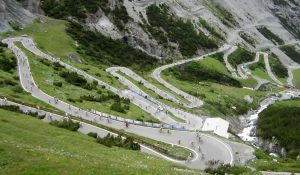 At 2758 meters, Stelvio Pass is the highest mountain pass in Italy’s Eastern Alps. Built in 1820-1825 by the Austrian Empire, the original road was built by the Austrian Empire to connect the former Austrian province of Lombardia with the rest of Austrian empire. Engineered by Carlo Donegani in just five years between 1820 and 1825, the road was built primarily for military purposes. Centuries later, the road is still regarded as an engineering masterpiece featuring 60 hairpin turns, 48 of them on the northern side numbered with stones. When it is open from June to September, the Stelvio Pass hosts countless cyclists and motorcyclists ascending up to the highest stretch of road in the Eastern Alps. 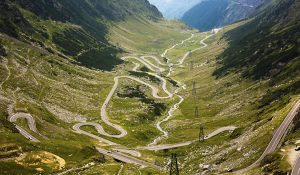 Built between 1970 and 1974 by military forces, the Transfagarasan is 56 miles long and rises to a height of 2134 meters. Military forces used about 6 million kilos of dynamite on the northern face. About 40 soldiers lost their lives. The long winding ribbon of paved road runs through the Fagaras mountains, connecting Transsylvania with Muntenia. The road is often closed from October until June due to the snow that covers the road. The northern part is the most spectacular side with a winding road, steep hairpin turns, long S-curves, and sharp descents. The road has more tunnels and viaducts than any other road in Romania and attracts hikers, cyclists, drivers and motorcycle enthusiasts. 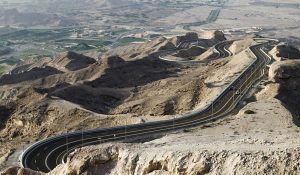 Cutting into Jebel Hafeet Mountain, one of the smoothest driving roads in the world stretches for 7.3 miles and climbs up nearly 4,000 feet. The immaculate Jebel Hafeet Mountain road scales up the mountain and ends at a parking lot with only a hotel and a palace belonging to the country’s rulers. The steep incline draws in road cyclists who take part in the annual Jebel Hafeet Mercure Challenge, a popular duathlon. Boasting 60 corners and 3 lanes, the road is lauded as the greatest driving road in the world. History of the road’s creation is often shrouded in mystery. 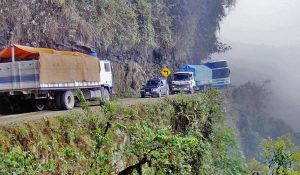 North Yungas road is renowned as the world’s most dangerous road. The locals call it El Camino de la Muerte (Spanish for Road of Death). Since its initial construction in the 1930’s, right through to the present day the road’s death toll continues to rise. Approximately 200 to 300 people lose their lives here each year, plunging off the road into the deep ravines of the Coroico River Valley. The road was built in the 1930s during the Chaco War by Paraguayan prisoners. It is one of the few routes that connect the Amazon rainforest region of northern Bolivia to its capital city. Only 3 meters wide, crosses and stone markers dot the narrow single-lane road. After 20 years of construction, a new road was opened up at the end of 2006 and features modern construction, multiple lanes, pavement, guardrails and many features that make it much safer than the original road. 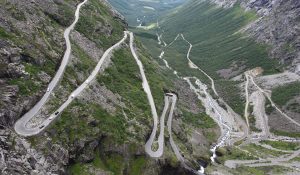 Translated in English as “troll’s footpath”, Trollstigen is one of the most spectacular mountain roads of Norway. Often closed between October and end of May, the road was opened in 1936 after eight long years of construction due to the extensive winter seasons. With a steep incline of 9% and 11 hairpin bends, the road offers breathtaking views of the Isterdalen Valley and the surrounding mountains such as Kongen, Dronningen and Bispen. Due to the sharp turns and narrow width of the road, there are few possibilities for vehicles to pass each other. About 7000 cars wind up the mountain every day during the peak of the tourist season. 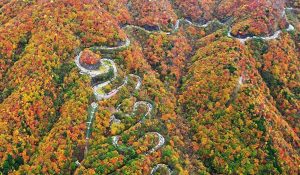 Connecting central Nikko and Oku-Nikko, the road rises more than 400 meters and there are separate roads to travel uphill and downhill.The Second Iroha-Zaka goes up while the First Iroha-Zaka comes down. The number of curves on the road was 48, matching the 48 syllables of Japanese Hiragana alphabet. Historically, the road was used for ascetics. Women and horses were not allowed to go up the slope.