Many have argued that Isambard Kingdom Brunel is the greatest engineer that has ever lived.  We certainly agree and appreciate his versatility and audacity in implementing grandiose projects. Even more impressive is that fact that Brunel is one of the few engineers who mastered and excelled in multiple areas of engineering, from civil engineering to shipbuilding.

While Brunel is perhaps best remembered for his construction of a network of tunnels, bridges and viaducts, a more remarkable feat is his contribution to the construction of the  ‘Great Western’, the first steamship to engage in transatlantic service.  According to a British documentary on Brunel, “the idea of using steam to power ships to cross the ocean appealed to Brunel.”  It is said that when when a company in charge of the railway network boasted about the existing length of their 100-mile railway, Isambard jokingly suggested that they could make it even longer – long enough to reach New York.

And so the Great Western was born. 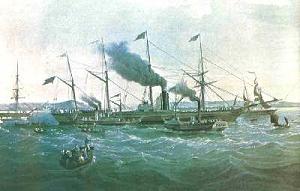 Brunel formed the Great Western Steamship Company, and construction on the ship started in 1836. The Great Western was built of wood and powered by sail and paddlewheels.  As in any radical project, Great Western’s design sparked controversy from critics that contended that at a length 236 feet she was too big to sail. Unlike his critics, Brunel understood a fundamental principle in shipbuilding, that the carrying capacity of a ship increases as the cube of its dimensions, whilst the water resistance only increases as the square of its dimensions. This meant that large ships were more fuel efficient, which would have enabled long voyages across the Atlantic.