As the global demand for energy continues to rise, so does the demand for bigger and longer conduits for the transportation of gas.  One such conduit is the new 745 mile-long Norway’s Ormen Lange natural gas pipeline. This pipeline is constructed for exporting of gas from the Norway’s Ormen Lange, one of the largest natural gas reserves of the world to the national Transmission system in the United Kingdom. Built at a total cost of 1.7 billion pounds ($2.6 Billion), the pipeline is about 725 miles (1,166 km) in length and has a carrying capacity of 26 billion cubic meters per year. 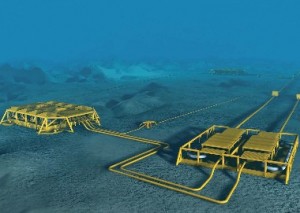 As in any other project of similar grandiosity, construction of this pipeline presented some unique challenges. One particular hurdle was the drilling conditions which comprised of  rocky and uneven seabed beneath the North Sea. These conditions, coupled with the ever-present tectonic movements, ridges and existing pipelines also added to the factor of disadvantage.  To access the gas reserves in the Ormen Lange, ground breaking work was required with developer having to use unmanned modules and building equipment to place the platform on the ocean floor.  With a projected output of 70 million m3, the gas extracted from the Ormen Lange is entirely for transport, mostly through a network of seabed pipelines laid in rugged seabed terrain.